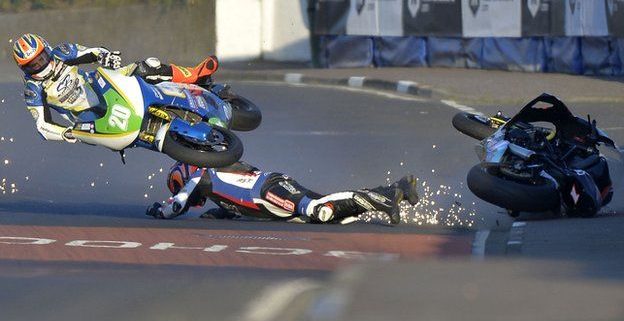 Imagine you could race like there is no tomorrow. You would live in a mental state where there are no regrets or any worries. Not even the subconsciousness of pain or even death. A world in a different time zone in space where you are 7 ft tall and fucking bullet proof. No remorse, regret to might hurt yourselves or others. A state of pure invincibility. Total freedom on the inside, which makes you glare on the outside for opponents to feel.

This is truly happening for those few who are about to become ‘truly good at it’. A short phase in a racing career where you just like that kid who doesn’t know pain YET. A child’s heart which hasn’t confronted with the term DEATH is free and can fly up high as it wants. It ain’t restricted by survival instincts.

By this way… maybe next time you see a real young kid racing and conclude ‘how talented and fearless it is’- you might ask yourself if that older racer with all those open wounds, scars and twisted bones is actually the braver one- the one who has faced all those facets of mental and physical pain. Anyway, that’s not my point.

You might say that also racing kids go down many times. I agree, but they don’t lose any front brake power at a 260 km/h. I know that this is maybe an extreme example, but there is one more. One which separates the boys from the man at the end of this phase. Let me explain this with a very current example.

Marc Márquez was racing with a child’s heart pretty much all his life. That made him what he is- or let’s say what he ones was. See where this is going? Oh yea- he always got physically hurt. For years actually, and pretty much twice per weekend. It actually has become part of it and his life to be bandaged up and to have the smell of pain relieving lotion on him for weeks. Nothing he couldn’t smile away and to be even more bad ass as he was before already. 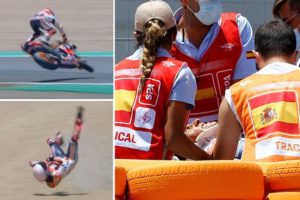 With all that been said… this isn’t even about the physical hurt, sweat, blood and broken bones. This is about the subconscious realization that you actually have an expiration date. That you are not invincible. Don’t get this wrong. This is not that a racer on this level grows much more fears of getting hurt or to die. This type of fear goes much deeper. It’s a career deciding fear for the most, which is why I mentioned in the beginning that only a few make it through this kind of phase. This is about ‘thinking’.

Time isn’t always a good healer. This operates against racers. Here is Marc. He was absolute dominant, especially the day when he crashed out- twice. The second one was physically quite extreme and it was over. His fighter heart rejected to give up, but a surgery didn’t help to be able to make pushups in front of the commissioners. Now you take the embarrassment of crashing twice into a very long healing phase… a lot of time to think about things.

Besides frustration to see your opponents sharing ‘your’ championship points, anger arouses because you can’t do what you are suppose to be born for… to race. That is out for months to come and you can’t even do your daily gym chores. Everything seems wrong because your routine- your momentum is fucked up. But also the healing period has an end and you can’t wait to get back on track to kick ass again.

It takes a while and some tests to get back to your lap times, but even only half a second short on it makes you worry. While others are impressed with you- you just can’t accept it because you subconsciously knew that this is going to happen and this was exactly what you were so afraid of all the time. You are fighting now a mental fight with yourself. Hold backs growing for crashing and to bend those titanium plates in your arm which would take you off the roster again. These are feelings you never even knew till here. You’re confused and you race under deep aggression, and you wonder, because you never had to be that way to be dominant.

You start leading races here and there again, but ‘something’ is holding you back. You reject that these are fears to get hurt. Sometimes you are successful with it- sometimes you don’t. You feel embarrassed not to be the big dog anymore. The one who sets the bar, and you realize that your opponents know now that you are not unbeatable- that also you have an expiration date, and so your outside glare fades. Subconsciously, you are actually afraid that all this could happen in the very next race again. The child’s heart is broken. From here, you won’t be ever the same again, even if you are able to win championships. You’ve lost that immense freedom.

You might don’t like this article for reasons I even understand. There will be the time where you will though, and when you don’t have to ask me how I knew. I might cover the way of reestablishment in a additional article, but the solution is more or less personal and differs from racer to racer.

Knee Down or Body Positioning class

The Moto Lawyer donates motorcycle to Superbike-Coach
Scroll to top