I know that my statement is not based on a solid study. It’s simply because it’s impossible to run statistics on this because it would require total honesty of the crashed rider, or at least an authority who knows better. Both are an illusion, so let me give it a wild shot here.

Based on my own experience as a pro racer, street rider and coach, who has seen thousands of riders- and analyzing crash scenarios which even include my own back then… I brutally predict that 70% of all incidents on track or street could have been prevented if the rider would have known the shit!!!

Yep, the texting soccer mom in that SUV was the trigger, BUT… was really the point of no return on the brake reached?! Was there an escaping gap you didn’t even see while you’ve been target fixating that right-of-way-taking Prius?!  Or let’s say you actually did see the escaping gap- but your “I thought I’d do counter steer technique” is not enough to get you there?! How about that Mercedes Benz lane jumper which causes you to overreact. Yes, it was close, but maybe because of your f’d up reaction time and lack of focus?! And so on and so on and so on… 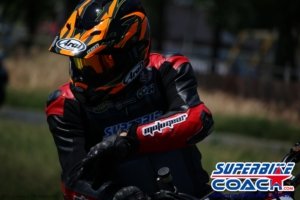 I’m not even getting started about the triggers which cause lots of cornering crashes, ’cause I could write a book just about that one. In fact, the triggers are there, plenty of triggers- but riders are just not mastering them. Though, it would be presumptuous to claim that one will be ever able to master them all. That would be naive to think because there is a point of no return out there for even the best riders on this planet. That’s for sure, so that’s our 30% right there. You think that’s quite bold to say?… then wait for this one…

Let’s say you’ve earned skill points throughout your riding career. A newbie starts with 1 and a highly experienced- or even racer could score out at a 100. That actually is not possible since there is ALWAYS an extra margin to learn, but let’s just round that circle up for now. Your score depends on where and what you’ve learned: self taught, videos, books, schools, or even from Uncle Joe. All of this certainly defines the score for all those things we gotta do- from the shifting to the trail braking and so on. The skill score.

Now let’s say you’ve learned all of these riding skills–or at least you believe you did… what are all of these worth if panic in an extreme situation takes over?! That’s typically when a skill score pops like a soap bubble. The real quality of your skill score depends on a thing which I call “mind coolness”.

Mind coolness sets you free. Imagine instead of freaking out, that an out-of-the-blue Prius just bounces mentally off from you, like a rock throw against a wall! Just picture how powerful that would be. With mind coolness you’d be able to really recall all the physical skills at the right time- and in the right order. Mind coolness buys you TIME. Time is space. That little bit of space which might make the difference on your way back home!

So this ‘mind coolness’ thing is actually the biggest thing you can possibly learn. Where?! Well, good luck finding a place. I might know of one though!