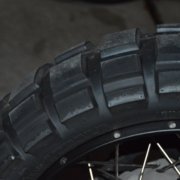 I seriously love to ride our 2018 Ducati Multistrada Enduro Pro. When this version came out and I saw a pic of it- the first thing I thought was that the damn thang looks like a Indiana Jones movie. This is why we’ve gave it the name ‘Indy’ :-) 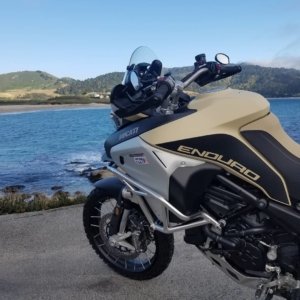 There are lots of reasons why I like this bike so much. Besides a ton load of technology in regard electronics (like an semi-automatic suspension), it’s got that mean battle cry only a 1200 V2 can put out. Well, especially after some mid pipe modifications. Furthermore it’s wild design, combined with all the tech and it’s pure size. That fascinated me the most.

But there was something else which got my racer blood temps up. Something which make this a bad ass ride. The aggressive look of those mud slinging animalistic appearing tires man. So I was sitting there looking at the picture smiling… who the hell is gonna ride that thing on asphalt?!

Even those Italian engineers an designers came to my mind. They seem to have a blast and went “F… it. Let’s give it 160 horses and put it on dirt tires!” So yea… I would ride it :-)

So when Indy finally arrived last January, it came on Italian manufactured 70/30 (dirt/road ratio) dirt tires with about 400 mls on them. So enough 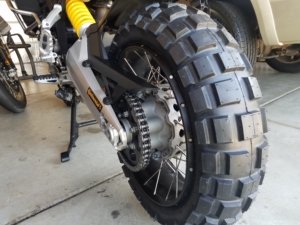 meat on them to do a row of Road Skill 1on1’s while I was waiting for Continental to send us replacement. In other words- I can compare here directly, right?!

Now here is the thing. 99% of the time I use this bike to work with lots of Road Skill students, so on asphalt. You might look for the sense of even putting 80/20 dirt tires on again, and even my boys at Conti are asking questions. But I have three reasons. I already mentioned one reason above, and the second is to literally keep me physically in check. You know… ex pro racers are very sick people ;-)

Logically, a dirt bike tire is not good on Highway mileage and top end grip, but the TKC delivers a hell of grip for a 80% knobby tire. I mean… look at the pic above. I have less chicken strips on my sides then most street riders have on their Sportbikes. That should tell the story in this regard.

So yea, the mileage I got out of my first set of Contis is not really compelling, especially when you are a true Adventure Biker. This is all relative though. I mean, if I would have used a Sportbike with comparable power- I also would get about 5000 miles out of the rear tire- BUT this set here cost only half as much. OK, I swapped the first TKC rear with 5200 mls on it, but I still had about 20% left. The 70/30/ tire the bike came with was totally done at 2800 mls already, and not to forget that the TKC is a 80/20.

At the air pressures I am riding at, I have phenomenal feedback from the rear and front. I ride those tires on the lowest Traction Control setting I have, and I can hang on exits right in there. I bet if Conti would redesign them a little, they would cost lots of Sportbike confidence for some. They could connect the smaller knobbies on the sides with the bigger one next to them to achieve more stability in full lean. Oh boy :-)

Good bridge to make my third reason. I kick so much ass on those TKC80 that it should turn on a light bulb on you, for what more asphalt appropriate tires from Continental must be capable of then, right?!!