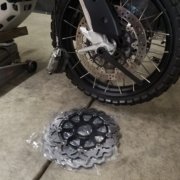 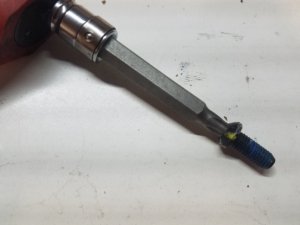 There is ‘that one bolt’ which extends a simple job in regard time, dirt, and resources… ONE fuckin’ bolt. You know those?!

So I did a brake job on my Multistrada Enduro Pro, because ‘Indy’ was missing braking power, which is already restricted with those knobbie tires. The plan: New brake fluid and bleeding air- new pads and cleaning caliper pistons- and 2 new rotors. 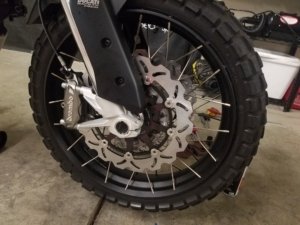 While everything else went well, the rotor bolts are glued in the wheel as shit, and I knew that was coming. Some manufacturers also make it harder by using bolts you’d need Torx tools for. I have, but those are really fragile. One after another coming off, not without a fight though… a bleeding finger and a trip to the hardware store for a new set of Torx tools is what that took. Then there is that one bolt. Out by a quarter and a destroyed head.

“MacGyver mode” is on now, as well as a never surrender mind set. Not enough meat to grab it with clamp pliers. Not enough out to saw its dead head off. Figuring that those cheap bolt removal tools you can buy with those TV commercials are senseless. Drilling the head was next, but the next half size bigger hexa did the job after hammering it in as much as possible. Then turning it as straight and smooth as possible got it finally out.

Four f’n hours and a garage floor covered with dirt, tools, sweat and blood for that one bolt :-)

Coach Tip: Heating up glued in bolts helps too.