Tag Archive for: how to make a drivers license

You are here: Home1 / Coach’s Blog2 / how to make a drivers license

Not many people talking about this actually , so here am I again with ‘another’ controversy, because I can’t keep my mouth shut about things which should have been said a long time ago. I’m looking forward to see in comments if the subject deserves to be ‘controversy’ in your eyes at all, so here we go…

How easy is it to make a motorcycle drivers license

In Europe as a kid of the 70’s, you had to make a drivers license and to ride a 50cc moped for 2 years. It cost 50 Euros, 6 classes and 1 riding hour. Don’t think you just open that motor to get 70 km/h hour out of it, because it was restricted by law to 25 km/h, so about 15 miles per hour! The cops new our games well, and it was not just costly to get caught… they could also locked your next drivers license step away for another year.

By the age of 16, you ramp up to 80cc lightweight bikes. The drivers license is comparable with the one for riding a moped, but comes with more required class and riding hours before you can make the driving test. That education cost about 1500 Euros, 11 riding hours and 24 hours of classroom! Those bikes are top speed restricted to 80 km/h, and you are riding them for another 2 years.

Now you’re 18, and since you went through a riding odyssey of 4 years- you are looking at another 400 Euros to get a drivers license to ride all kinds of motorcycles as long they are restricted to a maximum of 48 horsepower. You think that’s tough?!… there is more to come, because if you have crashes or fool around with the traffic laws- you will extent the 2 years period before you finally make it to a non-restricted motorcycle.

Now let’s say you are ‘mom-in-laws-favorite’ and stick tightly to the rules for another 2 years… yes, then it is time to make the A-license for another 1700 Euros, 12 hours of classroom and 11 hours of riding including a drivers test. Then… yes, finally then you are qualified to ride any motorcycle with all of its horsepower’s. At that point I should mention that when I was 20, that the entire motorcycle industry agreed with the laws to restrict the horsepower to ALL models to 100 hp maximum- to protect the riders from aggressive horsepower-marketing by the manufacturers. Makes kinda sense to me today, I must say. But I come back later to this once more. However, I don’t know if that ‘self-restriction’ is still ongoing over there, because I live in the country of my heart, the United States of America, since 2008 now.

Make a drivers license in California

So I had to renew my license as I emigrated and I didn’t complain hearing that I can make a motorcycle drivers license for only 28 bux. I mean… compared with the 3500 Euros I’ve spend… that’s a smile on the face right there. So I answered those funny questions in a written exam to get a temporary drivers license for 12 months… WHAT?! I mean… at least back then, nobody knew that Can Akkaya- a ex-racing pro from Europe, actually really can ride or not… right?!

Yes ‘I can’, but this is maybe like a ‘suicide permission’ or a ‘license to kill’ for someone else, because nobody (!) even asked me if I can ride… they just gave me a motorcycle drivers license. Just like that. I’ve passed my DMV circle riding test one week after my written exam. Maybe I was an exception getting so easy to a drivers license?… unfortunately not, but there are at least some more rider orientated looking options out there… but are they really?! Let’s see… 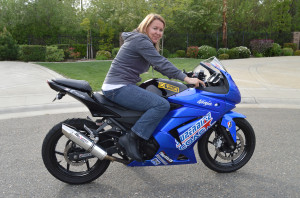 My wife Marion wanted to make her M1 drivers license here as well, so I started teaching her from the scratch. She made it for about $270 bux and a weekend of time after the written exam. Would she be ready to go after this without having me continuing her training?… no she wouldn’t! Then I meet students almost every day who are coming out of ‘Certified Riding Schools’. They ‘past’ the test or got kicked out to go and learn to ride on their own, to finally come back to be some kind of ‘good enough’ to make it then. So that’s what this is about, isn’t it?! To be good enough for the big ‘test’.  However, new riders like this find a place to learn from the scratch in my ‘Basic Rider 1on1‘ program. That’s how Anne-Marie-Pham got in contact with me, and it took a while until my confusion faded. Her journey is the trigger for this article btw.

Anne signed up for my Basic Rider 1on1, which is designed to teach riders who don’t know how to ride AND who are not having a motorcycle drivers license yet. So I ask questions where she’s at and find out that she actually just achieved a drivers license, so I am referring her to my Road Skill 1on1 program which would be the logical next step. She had a hard time to make me understand that she need to learn from the scratch, and rejected my suggestions. My confusion… I am in a conflict thinking that a rider needs to learn from the scratch, even though the drivers license has been successfully mastered already. Feel me here?!

Since I don’t want to charge or offer a not suitable program, I offered to just transfer her Basic Rider to Road Skill after seeing her on a motorcycle and she would have to live with my decision… I was glad I didn’t! Anne-Marie was totally terrified and told me her story with that ‘certified school’ she took at some dealership parking lot:

I signed up for CMSP and I came into this class excited, I came out of this two day class as scared as I can ever be! I can’t even tell you how many times I dropped the bike, I lost count. And get this…. I passed!!!

What I’ve seen was a totally lost soul, but not ready to give up on a new hobby, and I had to win her trust first. I don’t even start talking about the curriculum what those schools have to go with, and which produces fears and hold backs towards braking. It was all showing- and shocked me a lot. Anne’s confidence grew by the hour, and she hired me for another Basic Rider session before I will give her my OK for the Cornering class, where she will learn all survival skills my way!

Comparing the European system with the regulations in the U.S., it seem to be bad for the economy over there and also it makes it hard to recruit new riders, because more and more kids are skipping the pain and just wait till they can drive their stupid VW Golf GTI once they are 18 years old. This is what this is all about friends… the economy. A ‘quick’ drivers license makes a quick sale. For me, this is almost like giving a new rider a unlocked gun and to say… “Just point it where ever you want- and this here is the trigger!”

Sure- if you would have asked me when I was 16, to make a drivers license for only 28 bux by pretty much answering 36 questions correctly and for doing some circles on a parking lot… I probably would have declared that day a Holiday, especially if you also would have told me that I could just go and pick a 210 hp liter bike right away!  Would it been healthy for me?!… no it wouldn’t. Don’t you tell me you’ve done wise decisions from 14 till 25 years of age… so I didn’t, and so it would be not too bad if someone helps keeping things in check a little. The system has to change… now! 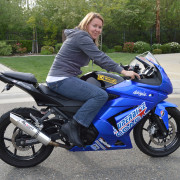 Believe it or not- I’ve been together with my wife Marion since my second year of racing, and we’ve ridden tons of bikes in all those years- she was always a passenger… even on Germany’s famous 13 miles Nuerburgring Nordschleife to smoke guys on big bikes- but she NEVER rode a motorcycle her selves!!!

But since we have that sweet Superbike-Coach rental bike, a Ninja 250- Marion sat on it… declared it as ‘cute’- looked at me and said “…teach me to ride. I wanna make a drivers license!”.  From here, I want to pass this three part article on to her to tell the story of how it’s like- and what to do in order to get a motorcycle drivers license:

Here is how to make your M1 drivers license, Part 1 of 3, by Marion Akkaya

First, I went to the DMV to get the booklet (http://driving-tests.org/california/california-motorcycle-manual/) to prepare for the written test. After studying it for a couple of days, I took some free available test online just to make sure not to see where I’m at. I also scheduled an appointment not to waste my time by waiting for hours in line, which is easy to do online: ) 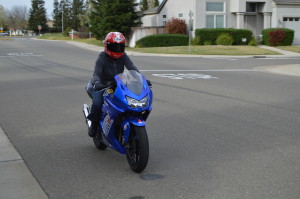 When I arrived, I still had to wait in line, but it was much shorter than what I saw on the other lines. I had to fill out some paperwork about name, address, SSN, information about already existing driver license – the usual stuff, than I got a number and I went back to wait until they called my name.

It took about 15-20 minutes until a DMV worker told me that I have to renew my car driver license when adding a motorcycle license. This information took me by surprise because I wasn’t prepared for the test. I paid $ 29 before I got to window A, where they took my picture. Then they send me to the testing room, loaded with about 20 computers. The nice part by taking it online is that it shows right away if your answer is correct and it is much faster. On the other hand it makes you more nervous after a mistake. Some of the questions were common sense, while other just confused me. I passed my written test for the car right away, but had to retake the written motorcycle test. I had to go back in line, pull a new number and wait for probably 15 more minutes before I could take it again, but this time I’ve passed the test!

The good part is that you can retake the test three times before they send you home and you have to pay again. I am just glad that I past and now I can focus on the “little circle” through which I have to go to pass the driving test. I have no clue how to get through it, but I have the best riding Coach I possibly can think of- who will get me through this successfully. I was convinced he’ll be more sensitive with his wife- was I wrong! J

Now, the fun staff started –riding a motorcycle. ‘Coach husband’ started giving me riding lessons. We started first with some easy lessons, how to shift, to break, to steer, and the right body position. He showed me how to turn my head into the right direction instead of looking right in front of me. I learned shifting up without using the clutch, which is not easy in the beginning, but like he says:” what you don’t have to do- you can’t mess up” –and he is right. Believe me it was not easy for him, because I am a bad listener and I am just glad that I haven’t had make any push-ups yet :)

After a couple of days of training with him, he installed a vox radio in my Arai helmet and says “Let’s hit the freeway hon”, and off we went…