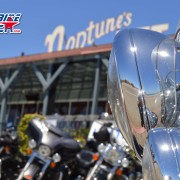 Our last Southwest Loop Bike Tour was a blast. We started out in San Francisco California on April 26th, and finished it 20 days later. Guide Can Akkaya had a tight scheduled program which included lots of surprises for the guests from Germany, Who has been the first time on U.S. soil, and Superbike-Coach has taking care of everything- from the motorcycles to the hotels.

Each day followed a well planned and organized scenic route. The first destination was San Simeon, down on California’s Highway One. Next day included Santa Monica Pier- Venice Beach, Hollywood Blvd and its walk of fame, and some Beer in a bar. Next day brought us to the Universal Studios. Yucca Valley’s Joshua Tree Park was our next goal, and riding Route 66 to see Grand Canyon from the south rim. Coach Can surprised the gang with a Navaho Jeep tour trough the Monument Valley, and the probably best Rib eye steak on this planet. Our bike tour head up north to see Antelope Canyon in Arizona, and then up to Bryce Canyon and Zion Park in Utah. Down south into the heat of Las Vegas for 2 days, and then right into the Death Valley in California. After that into the cold of the Sierras and its Yosemite National Park. A two day bay area bike trip shows what California has to offer, and another 2 nights in San Francisco are a worthy completion for this fantastic bike trip.

Meanwhile our guests from Germany made it safe and chuffed back home. Check out some photos and videos of the tour: