Book about and around professional motorcycle racing 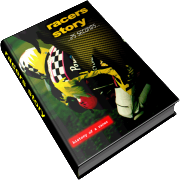 Believe it or not… I’ve started editing and translating the book for the English version, which will be also quite different as the original version in German. The reason is that the old version was more like a moment record, while the US version will be also more specific. My biggest decision is though, that I will publish it under the work title ’25 seconds’ as a eBook only. I actually don’t like it that much, but can you guys live with that?

It’ll be available on kindle, smart phones and tablet/pads.

Just a couple of days before that particular date, we celebrated a goodbye party in an apartment where we used to live temporarily while we sold our house. The stuff we wanted to keep was already on its way through the Panama Canal, in a wooden 8x8x10 box. Some stuff we couldn’t sell was auctioned to our friends under heavy tequila influence at the party.  They supported us that way, because actually nobody needs a broken hand mixer. It was a hilarious party in that now-empty apartment, but there was always a cloud over it, with our friends looking in our eyes and asking a virtual “Are you fuckin’ serious?!” and “When are you coming back?!”. In the morning, or more accurately in the middle of the hangover, the answer was confirmed and clarified…there was nothing that could stop us. END_OF_DOCUMENT_TOKEN_TO_BE_REPLACED